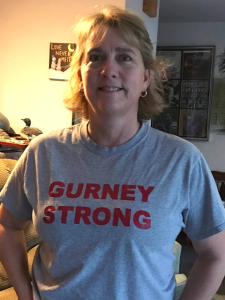 Lori Walser has been a Hospice of the Northwest volunteer for four years, but she has been taking care of people much longer than that. You might expect that from Lori who was a teacher and coach in the Mount Vernon School District for 20 years and is mother to 4 children (and 1 grandchild and 1 more on the way), but her service and dedication to “holding space” for vulnerable individuals goes even further.

“My favorite thing is developing a relationship and friendship with the patient and family members,” said Lori. “There is nothing more fulfilling than seeing the relief on the family member’s face when I can provide the gift of time, a listening ear, or bedside companionship.”

In one instance, after being a companionship/vigil volunteer for one hospice patient and getting to know the family, Lori was later asked to be the volunteer for that patient’s wife as her health deteriorated.

“She [the wife] remembered me and said that every time she looks in her address book and sees my name, she remembers the great times and visits that I had with her husband,” Lori said. 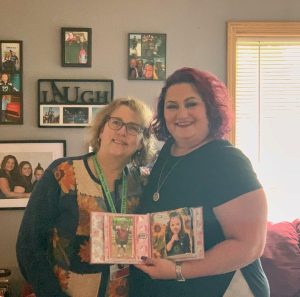 In her time spent around hospice patients, Lori said she loves listening to and watching the family members of the hospice patient, especially as they focus on the needs and wants of their dying loved one.

“I love the philosophy of hospice and that we want to give the patient a feeling of autonomy and that they truly are in charge of how they want to live their final days,” said Lori. “This is more powerful than anything else in my opinion.”

But Lori’s first experience with companionship wasn’t with hospice. It started when the son of her dear friends, Barb and Bill Gurney, had a terrible fall that left him unable to walk or communicate. Lori became an active supporter of the Gurneys, their son Brian, and the local #GurneyStrong movement. Every Monday evening for 2.5 years, Lori made the drive to Kindred Hospital in Northgate to read to Brian so that Barb and Bill could attend their other son’s football games.

She said this quote from Harry Potter (what she often read to Brian) sums up her time spent with him and every relationship she develops as a hospice volunteer: “Friendship isn’t about how long you know someone. It’s about who walks into your life, says ‘I’m here for you,’ and then proves it.”

Brian passed away just before his 21st birthday with Lori holding his hand.

After Brian passed, Lori felt she needed to continue giving the gift of time and companionship, which led her to being a volunteer with Hospice of the Northwest. She has helped patients make scrapbooks for a patient to give to their children, offer support as one patient chose Death with Dignity, learned what it means to honor the individual, and been to many celebrations of life. To help her remember each of those special relationships, Lori has a memory pendant with charms that represent each patient she has “been blessed to cross paths with.”

Any time she attends a vigil, where a patient is nearing the end of their life journey, Lori says she wears her necklace and remembers all the patients who have gone before them.

Hospice of the Northwest is lucky to have Lori as a volunteer and other volunteers like her who, in the words of Harry Potter, “says ‘I’m here for you,’ and then proves it.”