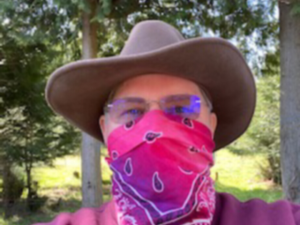 When Poke Haffner arrived on Orcas Island in 2016, she was impressed by the sheer number of volunteer opportunities. A retired lawyer and volunteer EMT from Alaska, she attended the first volunteer training that Hospice of the Northwest held on Orcas Island and “it’s stuck” ever since.

As a Hospice of the Northwest Volunteer, Poke visits hospice patients on the island and is also involved with the Ethics Committee, drawing on her diverse background.

But it’s the people (and dogs) she enjoys the most.

“I’ve learned a lot about island families and history from the patients and their families, as well as information about things I never would have learned,” Poke said. “I have had the privilege of spending time with people who were generous with their presence and their stories, and am grateful for them.”

In addition to being a Hospice of the Northwest volunteer, Poke (a self-proclaimed bookaholic), volunteers with the library on Orcas Island mending books, the Healing Arts Center as the board secretary, and Orcas Center during the Chamber Music Festival. She loves to kayak, walk in the woods, the smell of low tide, and to bake bread, something she’s been doing for more than 50 years! Although she does not have a dog right now, she loves to greet all the dogs she meets.