Every Moment of Life 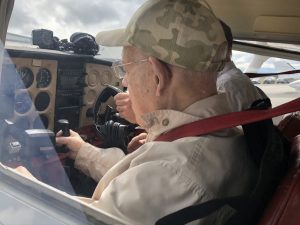 Floyd Palm loved to fly. A pilot since 1964, the cockpit of his Cessna was his second home. Dozens and dozens of flight logs detail his journeys: short hops around the Midwest and epic long-distance flights like his trip from Ontario to Guatemala.  For Floyd, family and flying made life worthwhile.

After a diagnosis of Parkinson’s disease, Floyd moved to Mount Vernon to be with his daughter Jean and her family. Eventually, Floyd enrolled in hospice to help him and his family navigate his end-of-life journey. Hospice provides an interdisciplinary team approach to end-of-life care where the focus is on quality-of-life. The team is comprised of home health aides, physicians, nurses, social workers, spiritual counselors, volunteers, and other therapists as needed. At Hospice of the Northwest, the team prioritizes compassion and dignity every moment of life.

Floyd’s hospice social worker is an experienced and talented woman named Halley. A diligent advocate for each patient’s end-of-life wishes, Halley is adept at helping individuals address the emotional aspects of late-stage illness, and she is dedicated to assisting families in identifying and securing the services and resources they need for additional support. Very soon after meeting Floyd, Halley recognized what an integral part of his life flying was.

Tim and his wife Ronaye have been generous and compassionate supporters of the Hospice of the Northwest Foundation since its inception in 2001. Ronaye, a former hospice nurse, and Tim, a volunteer for Veterans Airlift Command that flies post-9/11 veterans across the country, are committed to compassion and dignity at the end of life. When approached about helping Floyd have a final flight, they didn’t hesitate to say yes.

The morning of the flight was calm, warm, and slightly overcast. Tim arranged for special medical transportation for Floyd from his residence that accommodated his wheelchair. From earlier conversations, Tim knew Floyd was a dog-lover so he brought his two labs – one black and one yellow, to serve as a welcoming committee. Floyd’s daughter, grandson, and Hospice of the Northwest social worker Halley were greeted by Tim and Ronaye and introduced to Floyd’s pilot. 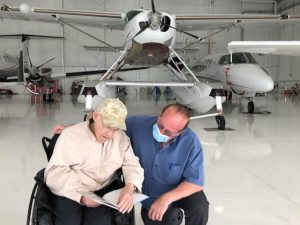 Before long, Floyd was comfortably situated in the left-side pilot’s seat of the Cessna – the exact same aircraft that Floyd had previously owned. Floyd’s grandson was in the backseat. After cruising down the runway, they were airborne and enjoying the sweeping views of the Skagit Valley and San Juan Islands. At one point, Floyd was able to “take the controls.” Pure joy for him, his grandson, and the watchful pilot.

Upon landing, the three flyers and the folks on the ground were all smiles.

If you would like more information about giving to or working with Hospice of the Northwest, go to www.hospicenw.org or call us at 360-814-5550.